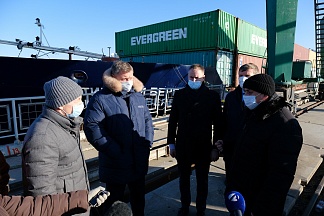 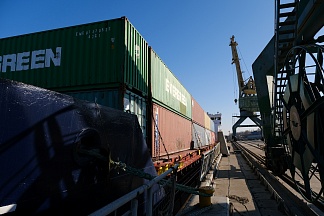 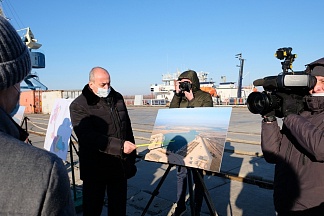 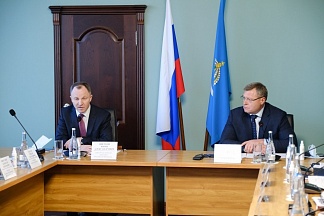 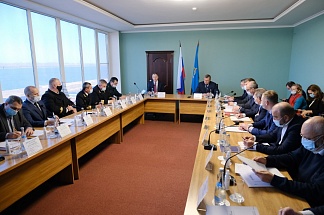 On December 3, 2020 a test container line in the Caspian Sea was launched in Astrakhan with the participation of Deputy Minister of Transport of Russia Yuri Tsvetkov and Governor of the Astrakhan Region Igor Babushkin. The line will connect the Astrakhan and Iranian ports which represent the Caspian section of the INSTC.

Caspian Container Lines is the name of a company and a new service in the Caspian region, operated by the Russian shipping company Kotlin SC LLC. The line will be operated by Caspian Express vessels specially re-equipped to carry containers. The first batch of containers with cardboard, equipment and other cargo was delivered from the Astrakhan port of Armada to the Iranian port of Anzali. The second voyage took place in the middle of December 2020. The anchor investor of the Astrakhan seaport SEZ, PLC Caspiy LLC, takes part in the development of the line which is considered an important element of the success of the future container terminal.

“This is the first time a container shipping line across the Caspian Sea and through Astrakhan is being established. In fact, we are restoring historical justice when Astrakhan was a center attracting trade flows and the intersection point of transport routes in the Caspian region," comments Oleg Savchenko, General Director of PLC Caspiy LLC.

This is the first step in the formation of regular container traffic in the Caspian Sea, the absence of which hinders the development of cargo transportation along the INSTC. Now there is no traffic system of vessels in this direction, containerization of cargoes is poorly developed, despite the fact that the whole world is switching to transportation in containers.

“We can carry bulk cargo in containers, the only difference is that to organize a journey for a vessel you need 3 thousand tons, and to deliver a container only 20 tons is enough. This is a step towards the consumer of the service, a step towards the manufacturer, it will be easier for them to sell and buy,” comments Pavel Ishkov, General Director of Kotlin SC LLC.

The prospects for the operation of the container line were discussed on the same day at the meeting of the Maritime Activities Сouncil chaired by the Governor of the Astrakhan Region. Sergey Milushkin, General Director of JSC SEZ Lotus, made a report on the creation of a port SEZ and the development of the INSTC. He noted that the created container line will not be limited to Iranian ports - it will gradually cover the ports of other Caspian countries, one of the most promising is the Turkmen direction.

“The importance of the INSTC is growing today due to the increasing trade of Russia and Europe with India, as well as because of the high interest of Western European companies to send goods to Central Asia. We are working with Indian, Iranian, Turkmen, German partners and economic zones. Protocols and agreements on cooperation were signed, confirmations of potential cargo traffics and interest in participating in the development of the route were received. However, there is still much work to be done - since all the elements of the corridor must work in a single system and without obstacles," said Sergey Milushkin.

Arrangement of test transportations of containers is included in the set of measures for the development of the INSTC transit potential, approved by the Government of Russia, and it is also supported by the leadership of the Astrakhan Region and considered the next important step after the creation of the port SEZ.